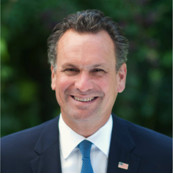 As a lifelong resident of Louisiana, John Young has dedicated the last 20 years to working alongside others to make the Sportsman's Paradise the best place to live, work and raise a family.

In 2010, John was elected Parish President.  Prior to that, John served on the Jefferson Parish Council. By removing government red tape, he has attracted thousands of new jobs to the parish and bolstered economic development. John Young also serves as President of PACE, Parishes Against Coastal Erosion, where he is leading a group of 20 coastal parishes to coordinate important efforts to fight for coastal protection and restoration. He is a former Assistant District Attorney and prosecutor,  John attended Loyola University where he received a Bachelor of Public Administration and he attended the Loyola University School of Law.  John Young is the father of five children and is dedicated to ensuring our state has a bright future.